Deaf and Derby- it sounds catchy right? Sure it does, let’s try it again Deaf’an’Derby. C’mon say it quicker. Deaf’n’Derby.

Yeah okay it doesn’t seem to matter how cool you try and make it sound, it never comes out right. Geddit it – sounds right? Ha okay, I’ll stop with the puns. Maybe…

So last time you heard from me was about a year ago – I’d been skating for about a year – and I spoke about the tribulations of playing as a deaf skater. I’ve now skated for another year, and there’s been fun, many games, there have been a couple of obstacles, and there’s been a hell of a lot more blood, sweat and tears since.

I’ve discovered some important stuff for my playing capabilities. I found that for me, personally, lane 1 is an absolute stinker. It’s the equivalent of blindfolding someone and perhaps tying an arm behind their back just for fun. Other than that track placement doesn’t seem to bother me too much.

My team and I have tried a few different ways to communicate- and in the heat of the game it turns out that signs just don’t work so well – at least not for us. What I do find works best, and strangely I imagine that it works best for those of you with full hearing too, is calm talking.

It’s decisive, it’s directional and it can be loud; but not screechy like a feral galah. This seems to work best for me. It allows my brain to interpret what needs to be done, rather than have to decipher what “OMGLANE1LANE1NO!LANE4THEJAMMERISONLANE4” means. Oh yeah it’s fun.

What has become easier is being able to tell people, “Hey yeah, I’m deaf. I might need a bit of help when it comes to this, and that.”

I’m still not good at reminding my coaches to do it though. For me, it’s an awkward conversation to have, so I hate having it. Some people who know me well know that I hate talking about being deaf. HATE IT!

Anyways, because I’ve had the conversation before, I hate the idea of having to have it again to remind my coaches that “Hey! Don’t forget you need to have ‘that’ conversation with the refs at the captains meeting.” I know it shouldn’t be a difficult thing but it’s something I’m working on.

Good news is; I’m okay with telling someone new. It seems that there is a right way for me to have that conversation, and a wrong way. The right way is a private conversation where I can just go over what I need to in relation to called penalties and being addressed in the box (not that I’m ever in there…much). The bad way is where I’m forced to announce it in front of everyone where it makes me feel…embarrassed.  No one likes to be singled out. I hate that kind of attention; coupled with the fact that I don’t want to be treated as special. I just want to know when to go to the naughty corner, and when I can leave. That’s all 🙂

Playing as a deaf skater has meant that there have been other things to work on, along with the usual learning progression but thankfully I have wonderful people in my league who have been with me every step of the way.

It’s meant that I’ve learnt that going out with a plan is so much better than winging it. I mean that sounds like common sense but seriously…a plan! Those jams where I’ve been thrown out at the last second, and I don’t know what’s happening – I don’t know what wall formation, who’s assisting, or even what lane I’m going into – can really leave me feeling lost out on the track. I’ve been told that sometimes you don’t know this stuff, you just have to react. Well, all I can say is; right now…without that, I can only do the best I can, because without being able to hear your hastily thrown instructions, quite often from 10ft away, I’ve got nothing. Absolutely nothing!

Buckle up kiddo – you’re going to have one hell of a ride! 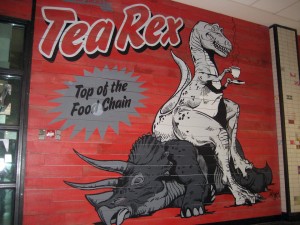 So imagine, you’re skating, you’re low, you’re strong- your team mates are right there beside you. There’s a roar of noise. It’s a crowd of people shouting, whistles blowing, and wheels hitting the deck- but you hear….

I’m going to do something I very rarely do- speak about something intensely private and personal to me.

I was born with nerve damage to my hearing. They discovered it when i was about 6 weeks old. I run with different hearing levels in each ear. My right hand side is classified as severe to profound, and my left ear is a bit better at just severe. Which puts me into the pretty damn deaf range. My hearing isn’t so great, especially in really noisy situations where i can’t really see what is going on, and there’s some pitches i just can’t hear at all. But I can read lips like no-ones business and you wont see me whinge about my hearing till someone headbutts me in the ear!

Okay so people are going to ask- how does a deaf girl play derby? With patience- mine and yours. With awesome communication, and not being adverse to being thrown around by your team mates (actually truth be told I enjoy that bit).

In reality it’s not that much different to how anyone else plays derby. I train. They train. I fall over. They fall over. Someone blows a whistle and people scatter- that’s my cue to get the heck out of dodge. Best thing is about derby and being deaf- Everyone is using their derby VOICE. There’s even some equality in it- do you know how hard it is to understand someone talking around their mouth guard??? For the first time ever I’m almost on equal ground, that my friend is pretty liberating.

Bad thing is- in scrim there’s so much noise and it’s frantic, you’re going to have to come up with some hand signals for you and your team. Even forming some good partnerships where subtle signals can be used instead of wild gesticulations. But just know- there are some of us out there doing it already, and not just deaf girls.

It’s fun! Come on… take a walk on the wild side.